I was born in the beautiful hill station of Shimla – where One & A Half Wife is based – but spent most of my life in Mumbai. My parents were with the government and worked all around India, so I’ve seen almost every part of the country.

I have an Economics & Statistics undergraduate degree, and an MBA in Finance. After a short stint in corporate finance, I became a business journalist and worked with the Times Group and NDTV in Mumbai, before joining Bloomberg’s Indian news channel in the US where I reported on the stock market from Wall Street. I love traveling, which has given me a wonderful platform to immerse myself in different cultures.

I read a lot as a child given that my home was filled with books. This included Enid Blyton, Sidney Sheldon, Jeffery Archer, Somerset Maugham, Ruskin Bond, Shakespeare and RK Narayan, the typical fare that Indian children growing up in the 80s-90s were given to read. I got glasses at the age of twelve because my head was always buried in a book and I even recall that the first all-nighter I pulled in my life was when I stayed up till six in the morning reading Gone With The Wind.

I was 19 when my first short story, Aberration, was published online. The plot and characters stayed with me for months before I gathered the wherewithal to finish the story. But the discipline of writing, its stark loneliness, does not usually appeal to the young and skittish. So I started writing seriously only in my late 20’s, though at that time it was only short stories. To improve my art I took several writing courses in New York, and after a fair share of rejections my short stories began to be published in reputed US literary magazines. The idea for a full-length novel, One & A Half Wife, came only in 2010, and that’s around the time I also started putting together short stories that would come together in the collection Happy Birthday!

I wrote my first two books while working full-time. It was insane. I was working non-stop for five years, filling the days with a job with which to pay the bills and writing like a maniac during every free moment. I became so consumed by my writing that I could no longer sit through a movie or a TV show, or go out for dinner or parties, as I’d feel guilty about wasting time. My social life dwindled to ten per cent of what it used to be, and I’m lucky that my deepest friendships were formed before I started writing so I still have a strong support system. I once had my laptop tip over and cut my upper lip (I’m a horizontal writer), and I didn’t get up till my T-shirt was bloody because I was in the middle of writing a crucial scene. That is mania, love, passion, obsession. That is writing.

I found writing the novels incredibly tough just for the way you have to beg and steal time, the rigorous endeavour of it, the oddity of spending years doing something that could come to naught, the sheer task of sitting on your laptop and as Hemingway would say ‘bleeding’ onto it. Getting published the first time was tough simply because as an outsider I wasn’t cognizant with the process. Once I figured out how it works I sent out emails and One & A Half Wife was picked up within two hours by Westland. Once it did well, Random House approached me for Happy Birthday! 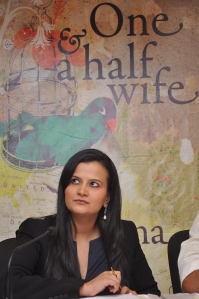 I quit my job to write my third novel Men Without God. I’ve dipped into my savings made over the last ten years to be able to afford this, but it took the success of two prior books for me to take such a risk. That said, real writing, that raw savage beast that you walk with, comes with the axe of insecurity, of a little madness, hanging above your head. So if writing consumes you and it’s all you see yourself doing, then let no desk job distract you. If you’re a little less insane then build a secure financial foundation before taking up writing full-time.

I believe the biggest roadblock in our life is our own fear, in whatever we endeavour to do. Whether it’s a job, traveling to a new country, falling in love, we become our fear. Therefore, I do what I know, what comes to me, and don’t think about what I can get but what I can give.

My grandmother always told me that if you show three things in life: hard work, courage and kindness, the universe decides to join in on the fun. That is exactly what is happening with my life as an author.

2 thoughts on “Meghna Pant – Writing is a calling, not a choice!”